Everybody Has A Plan Until They Get Punched In The Mouth: Why Business Plan And I Run In The Opposite Direction! 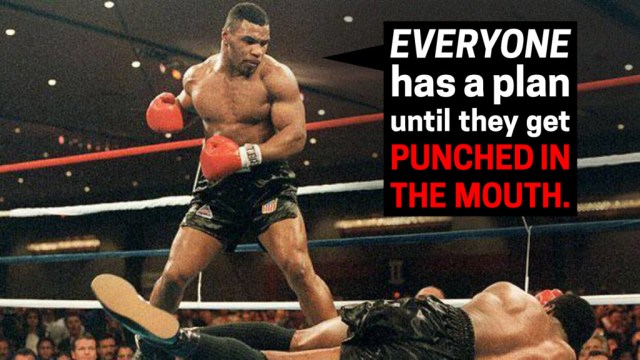 It happened almost four years ago. It was a bright sunny day and I was on my way to Enactus workshop with my teammates. What happened in the workshop is something I’ll never forget. We were
given a simple task: in eighteen minutes, teams must build the tallest free-standing structure out of 20 sticks of spaghetti, one yard of tape, one yard of string, and one marshmallow. The marshmallow needs to be on top.

The teams were shuffled so that we don’t have a team with all members from the same college. When our time started, we jockeyed for power and we tried to come out with a grand plan of how to build the tallest structure. Then we tried to build the structure which kept on falling and in the nick of time somehow we were able to erect a standing structure. Finally, oof! Though we had the tallest standing structure, I realized that at the core our approach was wrong when we were shown this video.

As a kid, I was not good at studies, so I always sided towards drawing (and sports). It so happens that my early fascination with art has inculcated in me the qualities of the following intuition and failing. Even though almost two decades have passed since the first time I picked a pencil (to draw, of course) in my hand. Somewhere on the way, those qualities got imbibed in my DNA. And this is the reason why the tagline in my social media profiles says, an artist in the business world and even if I’m not one, I’m striving to be one.

And if you think experts in your field are in a better position to predict the success of your startup, then you’re wrong in your assumption. Even they can go wrong!
“$500, fully subsidized, with a plan! That is the most expensive phone in the world and it doesn’t appeal to business customers because it doesn’t have a keyboard, which makes it not a very good email machine.” Steve Ballmer, former chief executive of Microsoft, on the iPhone shortly after Steve Jobs announced it.

This is just one instance out of many where they’ve gone wrong. It is revealing that so many breakthrough technologies and companies, from airplanes to Airbnb, were at first dismissed by critics as toys or niche markets. Old habits die hard and few people have the foresight to see how innovations will eventually change their routines. The book – Hooked: How to Build Habit-Forming Products – Nir Eyal

It goes on to prove the importance of validating your product and no your idea, with the customers. Instead of a business plan, you can use these approaches (as a whole) – value proposition canvas, business model canvas, and lean startup methodology. But how you approach the alternatives to business plans depends on your vision for your startup, which is unique to every entrepreneur. What’s wrong with the lean startup methodology?

At the end of the day, the amazing thing about business is that there is no single right.